So, it’s been some time since I last posted here.  In January, I started working full time at Ranger Up!  Since getting the job I’ve been setting up my new life in a new city and getting myself through a probationary status with the company to a full designer status.  It’s been hectic and a little stressful at times but it’s been some of the most rewarding work I’ve done since I was in the military.  Converting my ambition to work as an artist full time was daunting, even terrifying at times.  I felt like it might never happen and I’d just end up having to abandon it all together in exchange for a little stability.

With the new job comes a lot of new art.  Some I can share here, others that will be filed away for the future. 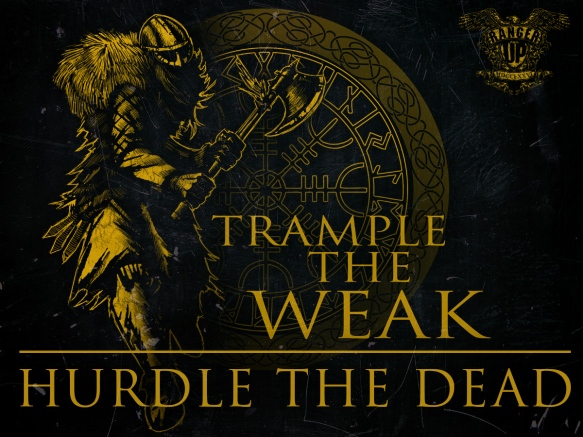 I’ve been lucky enough to see my work go from a design meeting concept to final design to printed shirts and products.  Seeing stacks upon stacks of shirts with my design on them go out the door to people.  Even seeing fans getting them as tattoos! 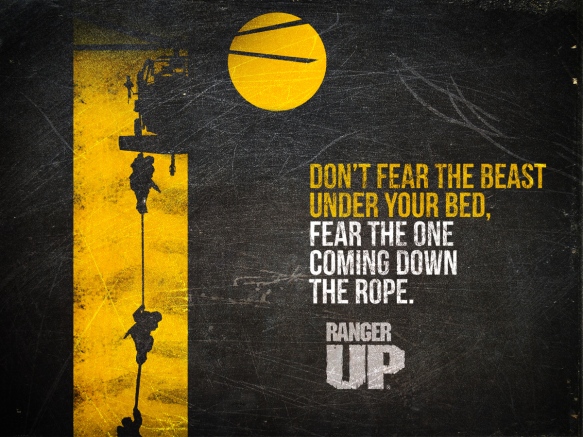 Last year, I wouldn’t have thought it possible that I would be here, in a place like this, working in the field I’ve loved so much. Back then it was just a dream to be considered as I struggled to make heads or tails of what it was I was trying to accomplish with my life again. I’ve sacrificed so much to get to this point, that some days I need to remind myself what it was all for. Every day I sit behind my desk, I can’t help but feel pride in what I’ve accomplished in the face of so many obstacles. There is still so much more to achieve. More goals I want to meet. The bigger picture is finally clearer than it’s ever been. 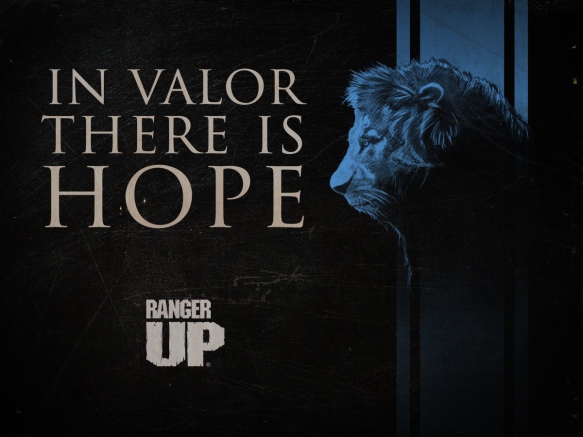 The glacier.  The dogs.  The trees.  The river.  The camaraderie.  So much of what went into this piece was an instinctual reaction to the trip I took to Alaska this summer thanks to Alaska’s Healing Hearts and Battle Dawgs Racing.  There was some time spent in my sketchbook, and on my computer just doodling trying to capture the right feel.  To bring something of my experience into the work and not have it feel disjointed and without focus.  The base shape for this was hashed out digitally, but it wasn’t until the ink started going down on the page, it finally felt as though it was coming together.

There are so many things in here that seem to just happen, and felt correct the second I saw them.  Deciding to build the image around drawings I did while I was up at the glacier camp with the dogs, the two you see here are from the Battle Dawgs team, Hugo in front and Duster at his back.  The team was a major focus for me.  Seeing them all together on the line stuck with me, and I knew that having a solitary dog on the shirt would never feel correct for what Battle Dawgs is about.  It’s about having each others back.  Being there regardless of how hard things get.  And getting through it.

If there’s one thing you don’t ever get used to in Alaska it’s just how majestic the natural world around you feels.  When the shapes around the dogs started going in it was just a reaction to this.  A primitive and visceral representation.  The shapes around the dogs began to form a mountain range and tree line with the gaps between giving rise to a river.  Things that in all honesty I didn’t see or even comprehend having done until they were already there.  It’s something all to important to the mission that Battle Dawgs and Alaska’s Healing Hearts is on.  To share the beauty of Alaska with veterans and to show them that ‘the world is bigger than the four walls of your room.’

I knew I wanted to weather the final image, to give it the grit and rugged look that would help it feel more stenciled and military.  And when the texture was laid over I knew it spoke to more than just military, but also to the dog sled team as well.  Running a team is tough, gritty, exhausting work.  Just getting the dogs from their kennel to the line, trudging through the snow, was an endeavor.

‘Helping our warriors one step at a time’ was a line pitched by Rick some time ago.  And something that I believe fits the Battle Dawgs mission perfectly.  They race, they inspire, they help, they heal and they keep giving back to those who have sacrificed so much of themselves and well being:  our service men and women.  To add the Battle Dawgs paw print at the end is to give their word, their signature, that they’ll continue to do so.  One race, one outing, one warrior at a time.

My boxer Leonidas was recently diagnosed with lymphoma (a form of cancer) and in an effort to raise some funds to help pay for his treatments, I’ve decided to put some of my design skills to the test and create a fundraising project that will go directly to paying his medical bills. 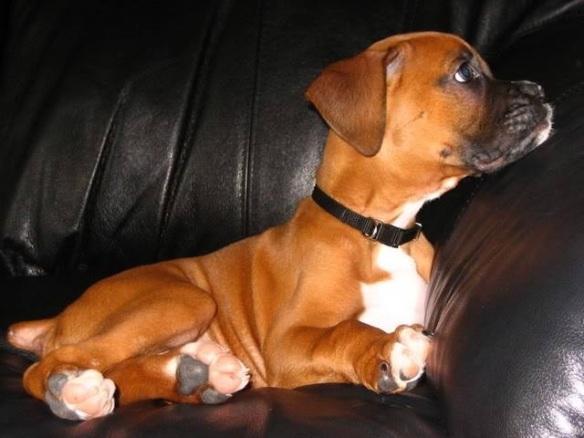 Leonidas is a 6 year old boxer who is still a puppy at heart.  He’s a charmer in every way who loves to be around dogs as well as people and he’s been with us since he was just 7 weeks old.  When we finally decided on getting a dog for the house, I had just recently left the military and was still dealing with a lot of stress and depression from combat.  The decision to bring Leonidas into our home was one of the greatest we’ve ever made.  He helped me through so many rough times, just simply by being there and aware of the pain my wife and I would be going through.  He has given us everything he could offer and I owe it to him to give him everything I can back.

When we chose the name we had no idea how appropriate it would be for him some day.  ‘Leo’ has always been a caring and strong dog.  The protector of our younger dog Molly (a 5 year old pitbull) and the a teacher to our newest dog Titan (a one year old bull mastiff).  And through the beginnings of his treatment he has been far stronger and more resilient than I can honestly say I have been.

To kick things off with what I’m calling the ‘Strength & Honor Fund’, I have designed a military style patch that you can see the preview of above.  This will be a high end, PVC patch with a velcro backing.  The message is simple and the design is strong.  It is your shield that stands with Leonidas against the tide of cancer.

Right now the patches aren’t being produced, but I’m opening the donations as a sort of pre-order for anyone who wants to get involved.  Once we reach the cost for production, I will be ordering them immediately.

This first batch will be for 100 patches, but if we meet that number quickly, I’ll obviously order more than that!  All funds for this project go directly to Leo’s medical bills and any excess funds will be donated to Hero Dogs, Inc.  A non-profit that trains and places service dogs with wounded veterans at no cost to the service member.

If you are interested in donating, follow the link below.  Any donation is appreciated and welcome.  Again, for every $8 you will be sent a patch so be sure to include name and address!

I’ve seen a local event at one of the shops called a ‘Paint and Drink’ or something along those lines, and for a while I’ve considered taking my wife out for one.  In the end I decided why couldn’t I just sit at home with her and do the same thing!  I have all of the equipment and supplies we could ever need so it only makes sense to throw some music and wine into the mix.

It was fun to teach her some techniques for painting and get her to actually make something with me that doesn’t involve digging around in the yard!  She did most of the initial drawing work and then handed the brush off when she felt the need to take a break (she is a self-professed perfectionist) and I would dig in with carving the painting out and trying my best to explain what I was doing at the same time.  Apparently I did a good enough job because she’s looking forward to the next one!

In continuation of the Topsail Island poster set, I present to you a Sea Turtle! I can’t help but make sea turtle based artwork a lot, it’s my wife’s favorite ocean animal of all time it would seem.  Ever since we went to the Sea Turtle Hospital on Topsail Island, our home has been covered in sea turtle trinkets and decorations!

This piece made use of the Pentel Brush Pen almost exclusively.  There might have been a few spots where I touched up some finer detail with the sharpie pen but for he most part I went with heavier lines.  Again, this piece was colored digitally and the linework edited in photoshop to give some sense of depth.

I thought I’d post this here as a bit of a palette cleanser after all of the really heavy and serious work I’ve been putting up lately.  This is part of a bigger project that I’m developing but for now it’s simply a pretty blue pitbull  drawing!

I have a beauty of a pit in my life and have had them as companions in my life since I was a little guy.  They’re wonderful animals and can be our best friend in the world.  My support for this breed is boundless and it pains me to see them as media scapegoats and targets.  This happens to any breed that catches spotlight because a group uses their trust improperly.  It happened with German Shepherds during the civil rights, it happened with Dobermans and Rototillers and it’s happening to Pitbulls.

Ok, so maybe I got a little heavy.  But I love them and there will always be a pit in my life from now until I die.  That much I can promise. 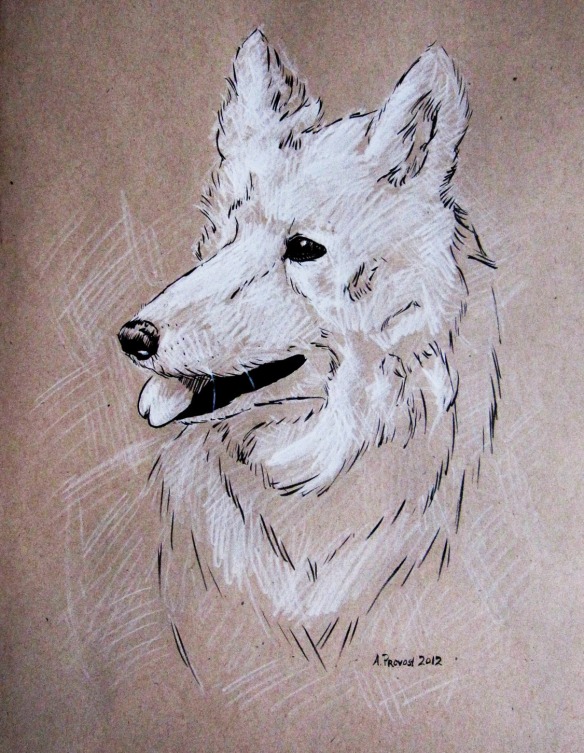 A friend asked if I could do a quick commission piece as a gift, having seen how often I draw my own dogs, he wanted to get a piece done for his friend whose dog had recently passed.

The style I’ve been working in recently for toned paper has a lot of potential for animal drawings as it really lends itself to creating fur textures and patterns in short order.  It also allows me to pick out the important details after getting the shapes roughed out with the whites.  With the paper taking place of working in midtone, these sort of drawings go quickly if you can plan them out a little during the white sketch.  I played up the charcoal here as well using it very heavily and letting the hatch come through as a fade and to help frame the dog more.

The ink work is really where the form comes together though and I try to use it as sparsely as possible on animals so that just the important features are framed to give a good sense of shape.

I always love working on animal drawings, especially dogs.  Might need to do some more stuff like this soon as a little mental break from the more serious stuff I’ve been working on of late.