Just a little heads up to any of you out there looking to snag a print of my Deployed series!  There is a promotion going on for my shop on Society6 for free shipping on most of the stuff there.  Head over and check it out!

I’ll try and keep everyone informed when these sort of promo’s happen! 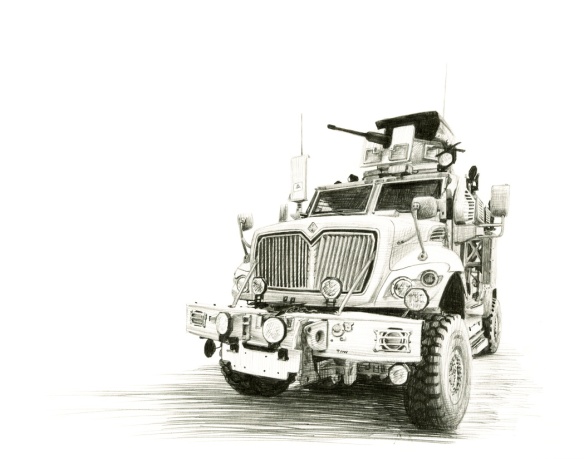 In 2004-05 I found myself running route reconnaissance for a year in Baghdad, Iraq. My vehicle? A kit-bashed Humvee armored with metal plating that was fitted as needed by unit mechanics in country. This led to a variety of injuries as we struggled to keep up with developing threats. When the MRAP was introduced long after my tour was over, I saw it as the culmination of years of trial and error to meet and beat the threats at hand for our soldiers and marines.

These vehicles are behemoths in the war against IED’s and mines. Shaped hulls deflect much of the blast and thick plating much of the rest. The protection they offer is unmatched by anything but actual armored personnel carriers and tanks while allowing for the urban mobility of a truck. There are a variety of MRAP types deployed, and they will continue to evolve as new threats are met head-on by our service members.

Developing my ideas on my alphabet book further still over the last few weeks has lead me to build it more around the singular imagery like above. In the end it feels the best approach and works more to my strengths.

Explosives Ordinance Disposal teams are a vital part of contemporary war. On the hook to destroy or disable any found Improvised Explosive Devices (IED’s) and weapons caches, and in some cases even doing the patrols themselves.

It takes a special type of individual to do the work these soldiers, sailors and airmen and without them the area of operations would be a much more lethal place to both our own service members and the civilians within them. Their efforts save lives by putting their own on the line. And even with the advent of robotic hands and helpers, technology can and regularly does break down, leaving a technician only one choice in some cases, hunker down, stare into the face of death itself and clip the wires that make him tick. 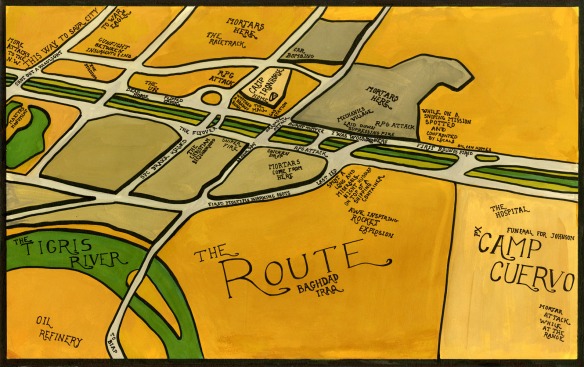 The Route – Gouache and felt pen on illustration board

I used this map as a sort of personal therapy to let some things out that had been swimming around in my mind for a while. Some things that came out were events and situations I haven’t thought about in years. Some I hadn’t thought about since they happened. I’m sure there is more in there, but I feel less burdened having put this together. 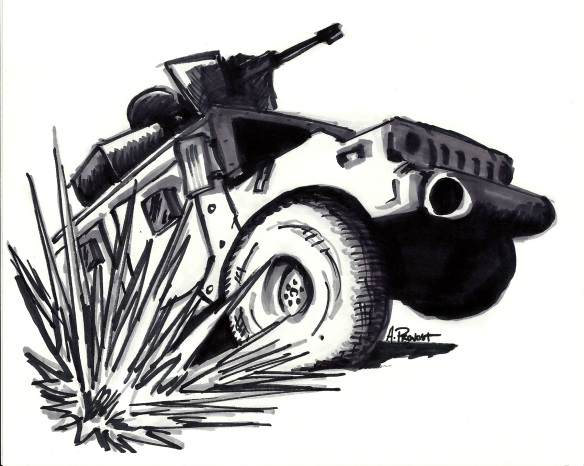 I did this drawing during a club meeting at CCBC as part of a quick exercise they were doing to create something based on a theme. The theme that day happened to be ‘monster’, and the first thing that came to my mind happened to be one of the most monstrous things I could think of, an Improvised Explosive Device.

I intended this to be the first of what would end up being a series of military themed sticker designs, but things never came together as my time was quickly soaked up with other projects that were actually for credit and kept me too busy to get going with other design ideas. Some time, I would love to get back to this series and get them printed for sale. Should that ever get off the ground, I fully intend to donate all funds to wounded warriors of the US Military.